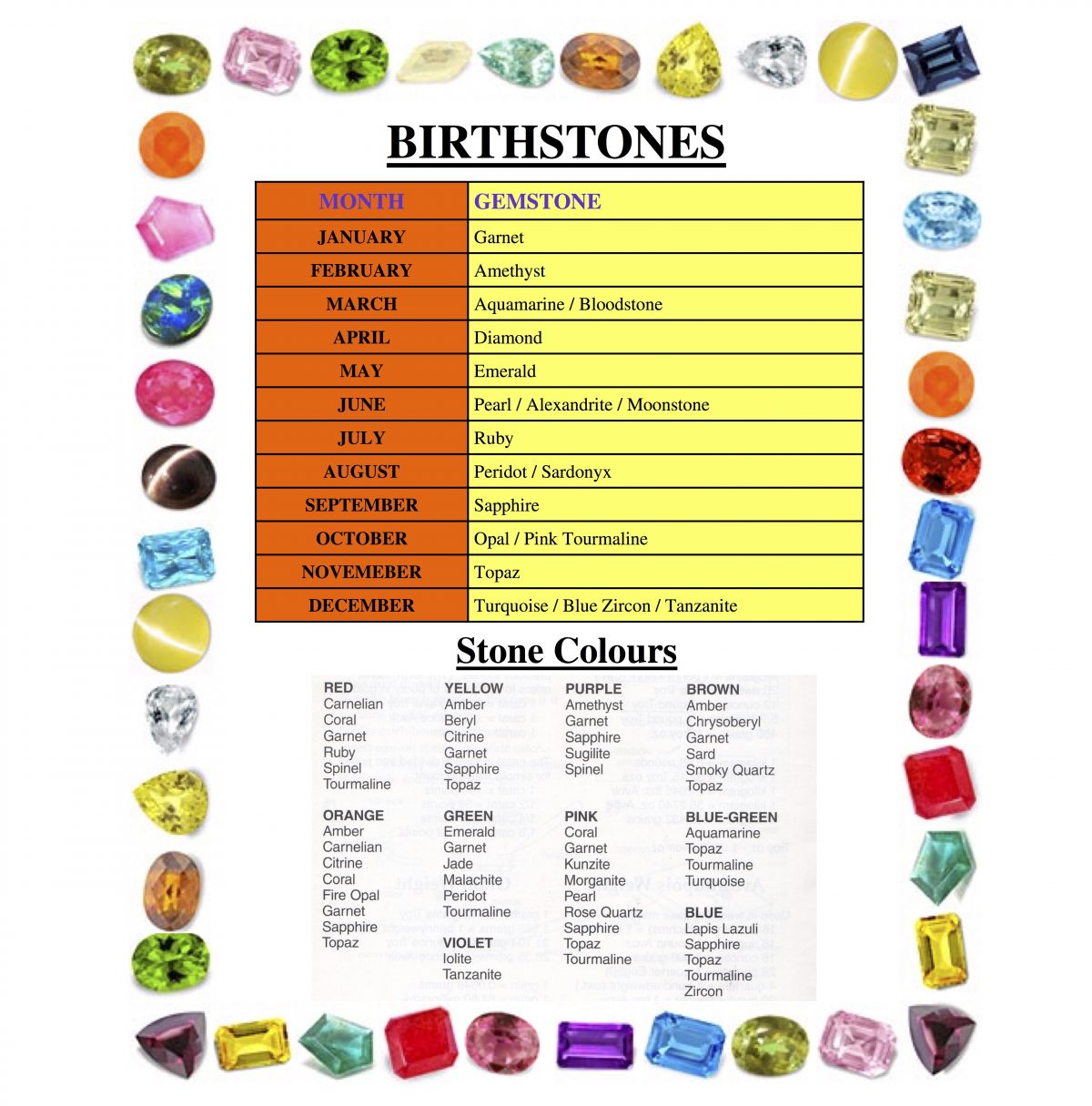 Garnet comes in many different colors. The name garnet is derived from the word pomegranate, because the deep red varieties of the gemstone resemble the seeds of the pomegranate fruit. A green variety, called tsavorite, was found in 1971 in Kenya’s Tsavo National Park. Garnet is believed to bring a sense of calm, when worn.

Amethyst is the purple variety of quartz. The ancient Greeks associated the mineral with Bacchus, the god of wine. It was believed that wearing amethyst would keep the drinker sober. Perhaps the modern sentiment, that amethyst brings power to the wearer, derives from this sense of being clearheaded.

Aquamarine is the blue to greenish blue variety of the mineral beryl. Its name is derived from two Latin words: aqua, meaning “water,” and marina, meaning “of the sea.” Crystals can grow quite large allowing the gem cutter to fashion sizeable gems. It is believed to represent unity.

Diamond is the hardest of all gemstones. They form deep within the earth and reach the surface through violent volcanic eruptions. Some diamonds are more than three billion years old, which is likely the reason that they represent endurance.

Emerald is among the most valuable of gemstones. This blue-green variety of beryl was once believed to heal ailments of the eyes. Colombian emerald mines are legendary and continue to produce the finest specimens. An emerald always brings joy to the wearer.

Pearl is different from other gems because it forms in the soft tissue of a living mollusk. Natural pearls are rare; most pearls are cultured by implanting a bead into the mollusk and letting the mollusk coat the bead with nacre for up to two years before the pearl is harvested. Wearing pearls is believed to bring clarity to the mind.

Ruby is esteemed among gems because of its rich red color. The finest examples come from Myanmar (Burma). In ancient times, rubies were believed to give the wearer strength and courage in battle. They are also considered a source of harmony.

Peridot is the gem variety of the mineral olivine. The most ancient source of fine peridot is a tiny island in the Red Sea known as Zabargad. Peridot has also been recovered from meteorites. It is believed to bring purity when worn.

Spinel comes in a painter’s palette of colors: orange, intense “stoplight” red, vibrant pink, and all shades of purple, blue and violet through bluish green. Fine specimens became the treasured property of kings and emperors. Spinel is believed to promote health.

Sapphire comes in every color of the rainbow, although blue sapphire is the most popular. Also prized is the rare pink-orange sapphire variety known as padparadscha, named after the color of a lotus flower. Sapphire represents loyalty.

Opal may exhibit a spectrum of colors called play-of-color. When this is set against a dark background, it is known as black opal. Australia is the source of most of the world’s fine opal. Opal represents hope.

Tourmaline exhibits a wide range of colors. Bicolored and multicolored crystals are common. Sometimes crystals are green on the outside and pink inside; these are called watermelon tourmalines. Wearing tourmaline is believed to bring strength.

Citrine is the golden yellow variety of quartz. Most citrine is produced by heating amethyst. Brazil is its main source, but it’s also found in many African countries such as Zambia, Namibia, and Madagascar. Wearers of citrine may experience heightened awareness.

Topaz is widely known for its golden color but it can also be found in blue and pink. Regardless of the color, it is believed to bring prosperity when worn.

Turquoise contains copper which is the source of its blue or greenish blue color. Many minerals, such as variscite, naturally resemble turquoise. Other minerals can be dyed to imitate it. Turquoise imparts peace upon the wearer.

Tanzanite (a variety of the mineral zoisite) was discovered in 1967 in northern Tanzania, which remains the world’s only known source. Its velvety, purplish blue color sets it apart from all other gems. Tanzanite is said to give its wearers balance.

Why do some months have more than one birthstone?

While differing traditions are often cited when a month has multiple modern day birthstones, the more significant reason is that some gemstones are too rare and expensive, and others just aren’t as popular. 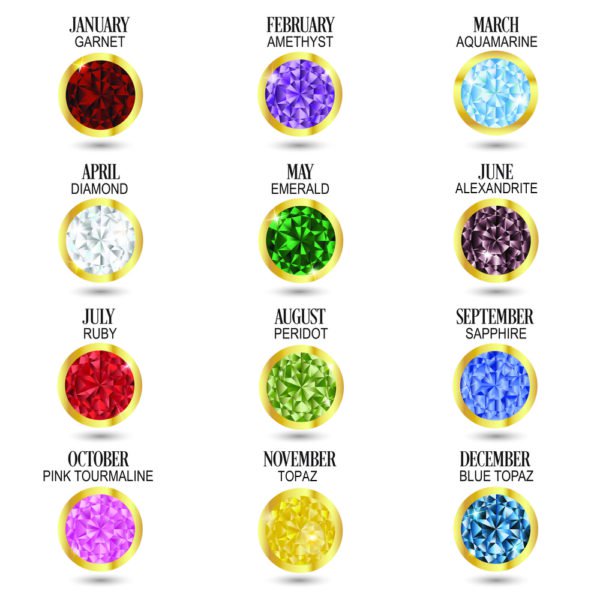 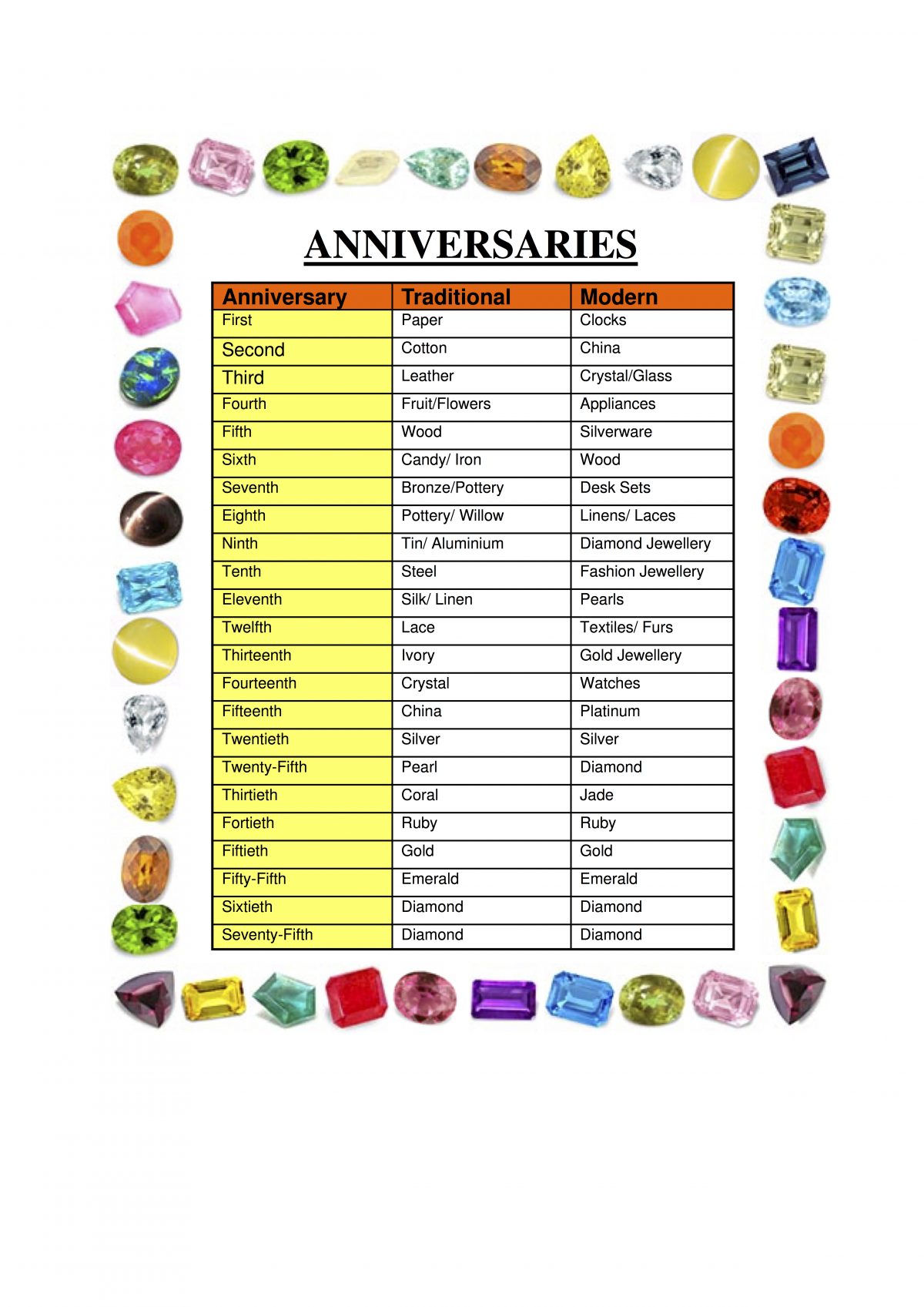